Planned by Vidyadhar Bhattacharya, Jaipur holds the distinction of being the first planned city of India. Renowned globally for its coloured gems, the capital city of Rajasthan combines the allure of its ancient history with all the advantages of a metropolis. The bustling modern city is one of the three corners of the golden triangle that includes Delhi, Agra and Jaipur.

The story goes that in 1876, the Prince of Wales visited India on a tour. Since the colour pink was symbolic of hospitality, Maharaja Ram Singh of Jaipur painted the entire city pink. The pink that colours the city makes for a marvellous spectacle to behold. Jaipur rises up majestically against the backdrop of the forts Nahargarh, Jaigarh and Garh Ganesh Temple. 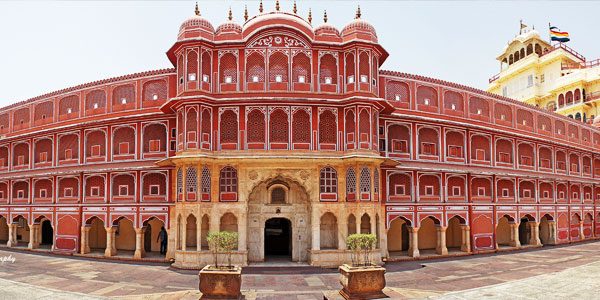 Located deep within the walled city, the City Palace Complex was conceived and built by Maharaja Sawai Jai Singh II, the founder of Jaipur. A beautiful fusion of Mughal and Rajput architecture, the palace is still home to the last ruling royal family which lives in a private section of the palace. 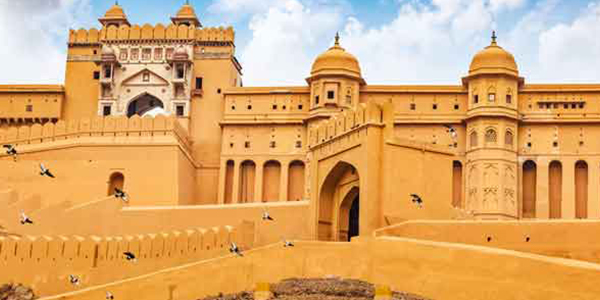 Amber (pronounced Amer) is at a distance of about 11 kilometers from Jaipur. Now a UNESCO World Heritage Site, it was the bastion of the Kachwahas of Amber, until the capital was moved to the plains, to what is today Jaipur.The palace, located in
craggy hills. 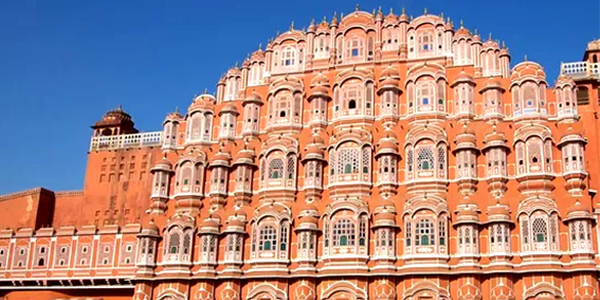 Hawa Mahal, literally the Palace of Winds, was built in 1799 by the poet king Sawai Pratap Singh as a summer retreat for him and his family. It also served as a place where the ladies of the royal household could observe everyday life without being seen
themselves. 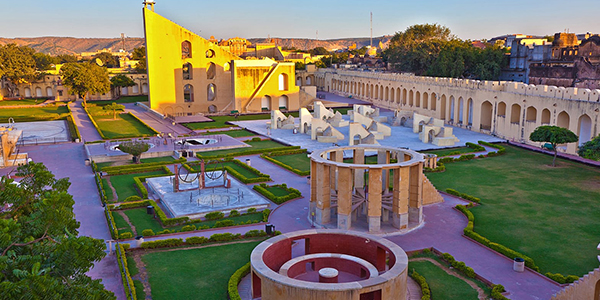 Now a UNESCO World Heritage Site, Jantar Mantar in Jaipur is considered to be the largest of the five astronomical observatories built by Maharaja Sawai Jai Singh II, the founder of Jaipur. It contains sixteen geometric devices, designed to measure time.track celestial bodies and observe the orbits. 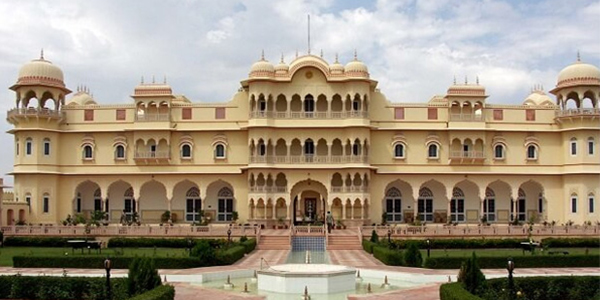 Nahargarh Fort sits proudly on a ridge of the Aravalli Hills, creating an impressive northern backdrop to the city of Jaipur. It was constructed during the reign of Jai Singh in 1734, and was later expanded in 1868. Nahargarh, which means abode of tigers.was a formidable barrier, defending Jaipur against enemies. 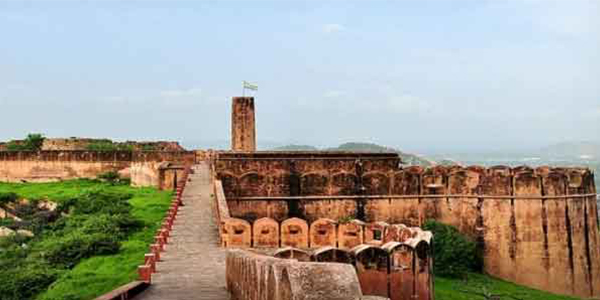 About 15 kilometres from Jaipur, Jaigarh Fort was built by Sawai Jai Singh II sometime in the early 18th century amidst the arid, rocky and thorn-scrub covered hills. Despite its ancient construction, it still retains most of its imposing citadel appearance. Visitors can see the world’s largest cannon – Jaiban, at the fort. 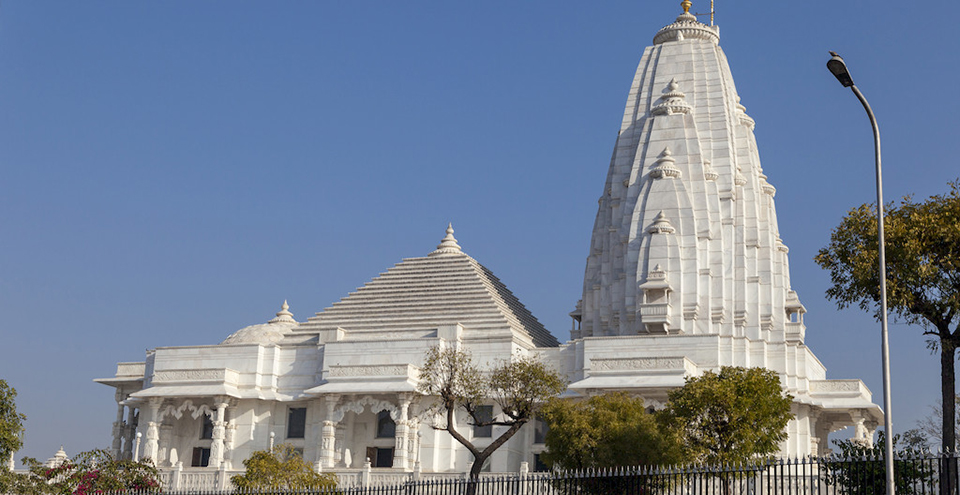 The Lakshmi-Narayan Temple, or the Birla Temple, as it is more popularly known as, is located at the base of Moti Dungari. Built on an elevated platform, this comparatively modern temple is built entirely of white marble and dominates the skyline of
south Jaipur. 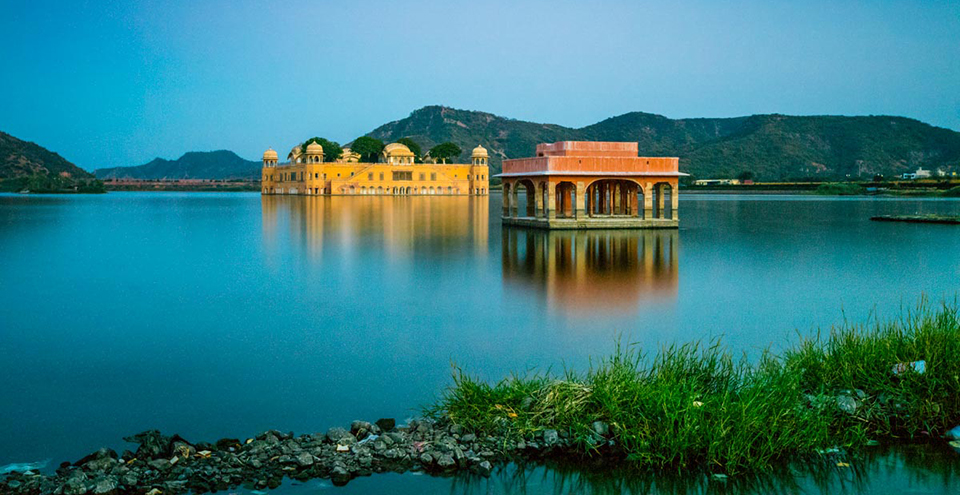 One of the most wonderful sights in Jaipur is the beautiful Jal Mahal or Lake Palace. The light, sand coloured stone walls and the deep blue of the water make for a wonderful contrast. The palace appears to float in the centre of Man Sagar Lake. where its magnificent exteriors can be enjoyed. 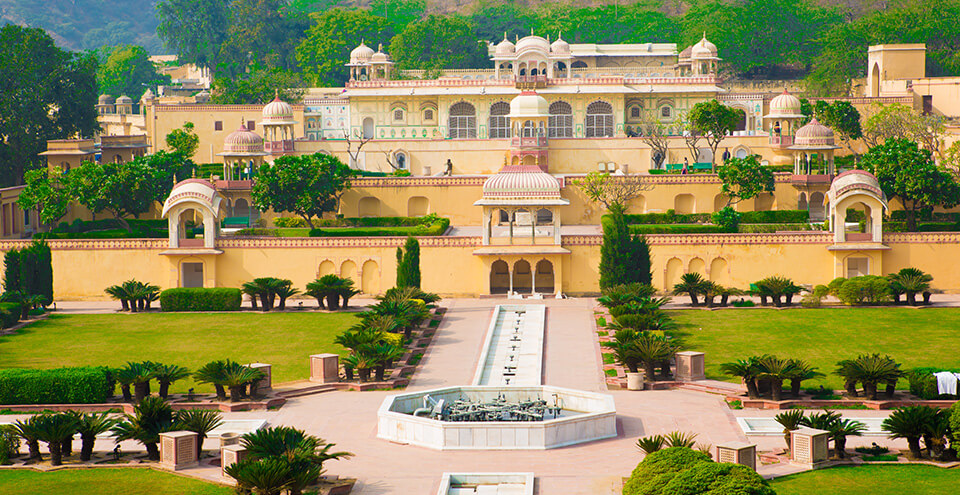 Sisodia Rani Palace and Garden is located 8 kilometres from Jaipur on the Agra road. Laid out in Mughal style, it is painted with the legends of Radha and Krishna. The garden is multi-tiered and has fountains, water courses and painted pavilions. Maharaja Sawai Jai Singh II built it for his Sisodia queen.